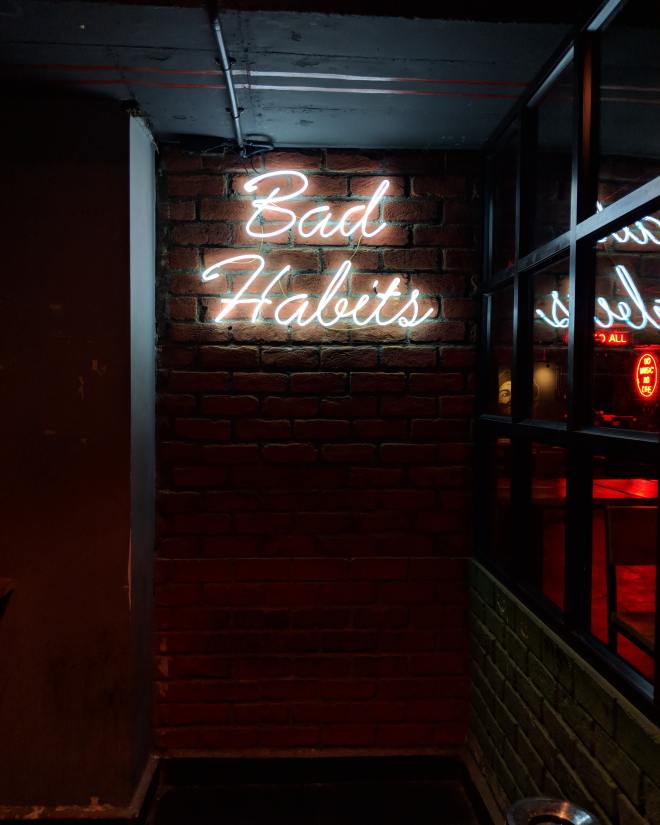 Bad habits. Everybody has them. But some differ greatly to others.

Bad habits might consist of swearing (guilty), drinking too much (guilty again!), smoking or overeating, among many others. They vary from person to person, though many people might find themselves having a bad habit that’s shared by others.

For week 37 of the mindfulness challenge, I had to observe a bad habit that I have, regardless of how big or small it is, and think of it objectively and mindfully. I shouldn’t hate myself for it, I should just think about where it comes from, why I do it, and whether it’s something I wish I could change about it. The idea is that by doing this task, I’ll understand my bad habits a little more and establish whether I’m happy with them or would like to change them (I mean, isn’t the clue in the name – I doubt I’d want to keep something that’s bad?). Ultimately, I’ll learn more about myself and why I do the things I do.

So, I have a few bad habits really, but some I consider to be more trivial than others. I get irritable when I’m tired or hungry, I lose my temper fairly easily, and I have a random intolerance for loud noises. Putting off exercising is one of the more trivial ones; it’s kind of rubbish, but I don’t get too bogged down about it. Similarly, not washing my hair enough; wish I washed it more, genuinely cannot be arsed. That’s kind of a contradictory one though, because since lockdown number one, I’ve only been washing it on average once a week and my hair’s got a lot healthier and thicker as a result (and I’m sure it’s also due to the lack of leaving the house/heat products etc.).

So for the purpose of this post, I chose three bad habits that I consider to be genuine and that I wish I could change. It was actually quite interesting to do this task, and I bet this post is riddled with psychological nuances to dig into, if you’re so inclined.

The first is a terrible habit that I’ve had for as long as I remember. I remember as a young child, maybe around six or seven, my Mum used to find ways to stop me biting my nails. She’d bribe me with sweets, money, days out, ear piercings, anything she could think that might interest me to snap me out of my nail-biting habit. It worked for a while, but before I knew it I’d be back to biting my nails.

On numerous occasions, I used the varnish which fills your mouth with an acrid taste whenever you so much as look at your nail. That’s all well and good, but as a child who adored crisps, it wasn’t so great when I wanted to eat crisps, or basically anything with my fingers, and have a mouth filled with the sour taste of the varnish, almost to the point where I threw up. It just wasn’t worth it. So I stopped that and continued biting my nails.

And so at around 13 or 14, I began getting acrylic false nails. It was the perfect cure for a nail-biting fiend. I worked on a Saturday and pretty much used all the money I earned from an entire shift to pay for false nails to be applied each month or so. I loved it and I still feel delightful when I have my nails done now. Of course, as an adult it’s an expensive luxury, one that I can’t always keep up with, especially right now, but it’s something that fills me with tremendous joy. It’s strange how something so trivial can always make me feel better when I’m down, but I detest the habit, so that’s probably why.

Another bad habit of mine, which is on par with nail biting is that I pick the skin on my lip. This habit is a little more unfamiliar to me, as I don’t know why I do it or when it started. But I know that I can’t stop doing it.

Unlike nailbiting, it doesn’t always happen when I’m anxious or worried either, or at least, not that I know of. But sometimes I’ll realise that I’ve picked the skin on my lip to a point where it’s sore or even bleeding, and then I’ll think ‘oh shit, have I been picking my lip?!’ It can be hard to distinguish sometimes as I do get chapped lips and am prone to coldsores, but I tend to have periods where it flares up more. It’s kind of compulsive, but less in the sense of obsessive and more just casual; unconscious, perhaps.

It’s not a good habit, and this task encouraged me to explore it more. I was definitely more conscious of whenever I did it and I tried to think about why, but honestly, I just couldn’t find a reason. I genuinely have no idea why I’m doing it. Anybody experienced something like this before?

I’ve mentioned this to a few people lately, but an absolutely awful habit I’ve developed this year is scrolling on social media. I’m talking aimlessly, sometimes for long periods of time when I know I should be and want to be doing something more productive or enjoyable.

It feels compulsive at times, like I can’t stop even if I wanted to. It began around the time of the first lockdown, and I don’t even know what I’d be scrolling online for, I’d just be scrolling. I’d wind myself up seeing peoples’ Facebook statuses and idiotic tweets, which only got worse with the onslaught of protests, racism, politics and the general state of the world.

The Screentime app on my phone has taken great joy in reminding me for the last 8 months that my screentime has increased. Each week, I receive a summary of my screentime for that week and I feel like it increases more and more each time. The only week in around 8 months that it wasn’t too bad, was when I put myself on a social media ban because I simply couldn’t take any more. My average during that week was, if I recall, was around 3 hours a day that I spent on my phone, which I think is still a lot if you really think about it. At the moment, my daily average for the last month is just under 7 hours a day.

I do use my phone to work – so this should be taken into account – but definitely not for as much time as I’d like to think. I know the majority of time is being spent scrolling, and I detest it. I have to actively remind myself to put my phone down, and drag myself away from doing it sometimes. I literally have no idea why I’m even doing it! I just wind myself up and end up feeling annoyed and irritable a lot of the time.

I’ve never done this before in my life, and now suddenly it’s all I seem to do. It’s not a good habit and definitely one I’ll be working to shift for 2021.

What about you? What bad habits do you have? Take some time to think this week and explore your own – you never know, your results might surprise you.

See you next week!